Description:
Abraham Lincoln surveyed the town of Petersburg certifying his plat on February 17,1836, five days after his 27th birthday.
At the time he was still living in New Salem. He later surveyed several additions to the Petersburg plat. Though self-taught, Lincoln was proficient. Following Lincoln's original survey notes, modern surveyors were able to find an original "old broken pot with a bottle in it" that Lincoln had buried as a corner marker over a century before. Tradition has it that he intentionally "skewed" one of the street lines here in Petersburg to avoid cutting through a poor squatter's property (in another version, it's the home of a Black Hawk War widow). Normally surveyors employed a crew of flagmen, axemen, chainmen, and others as assistants. Lincoln reportedly used only a small crew, doing much of the additional work himself. He even made do without a horse on occasion. When questioned, he said he didn't need one, as he "was somewhat of a 'hoss' himself."

As a deputy county surveyor, Lincoln conducted surveys throughout the area in the mid-1830s, laying out thirty-three properties, five towns and three roads. Surveying positions were political patronage appointments in Lincoln's day. Most area residents were Democrats. Indeed, it was a prominent Democrat who in 1833 appointed Lincoln deputy surveyor. Later, as Lincoln rose to prominence as a Whig, he and his old friends in these parts drifted apart politically.

Sticks and branches, thorns and briars took a heavy toll on the clothes of "landlookers"---as surveyors were called in Lincoln's time. Lincoln once received a surveying fee in buckskins. These he promptly gave to Hannah Armstrong who used them to "fox" his pants (sewing the skins into a protective covering similar to cowboy chaps). Another time, Lincoln sat on the bed of Rhoda Clary, wrapped modestly in the covers, while she mended his torn breeches. "Landlookers" endured cold winds and frozen limbs in winter; smothering humid heat and swarms of insects in summer. But the knowledge of people and places acquired in their travels could be valuable to ambitious men. At least one other American president endured the physical hardships and experience of frontier surveying as a young man---Lincoln's illustrious predecessor, George Washington. 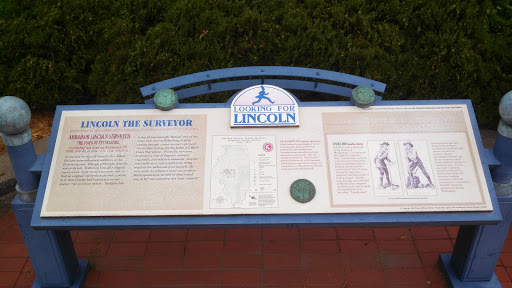