Description: This site actually has two historic buildings. Inside are the walls of the home of Eugene C. Bartholomew built in 1882. Bartholomew was an early Austin leader serving as a City Council member and Superintendent of Parks and Public Utilities. In 1885, the outside walls were constructed and the home was converted into a feed and grain store. In 1887, the Victorian turrets were added to the building and it remains as the only example of French second empire architecture in Austin. During its lifetime, the building has been a grocery store, dry goods store, pumbers' shop, physician's office, drapery shop, car museum, nightclub, and restaurant. In 1997, the Texas Ostopathic Medical Association restored the building to its original historical architecture and uses it as the association's state headquarters. Recorded Austin Historic Landmark - 1997. 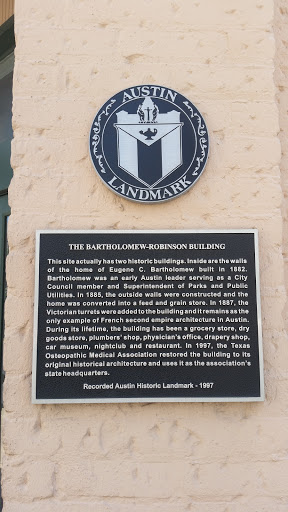